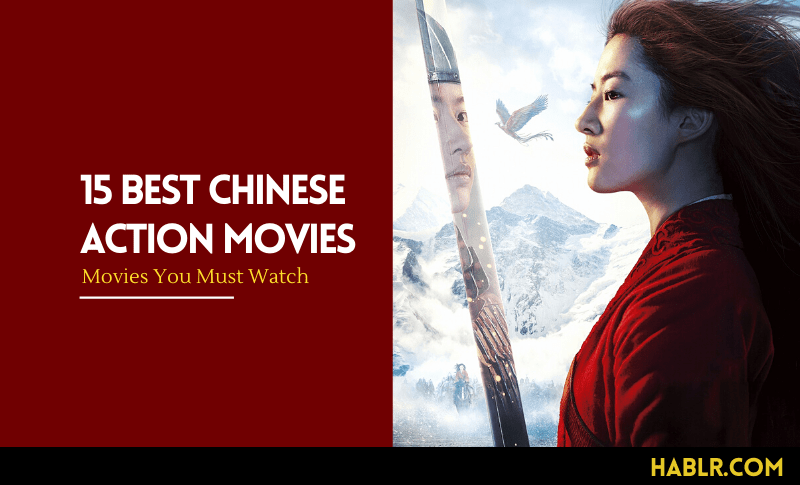 Ever been sitting on your bed while watching a Jackie Chan movie, see him beat up bad guys effortlessly, and think to yourself, “I could do that.” Well, here is not a list of tips on getting yourself hurt but the 15 best Chinese action movies (Hollywood).

You know you love an action movie when it makes you wish you could do the things they do. Chinese Action Movies are action movies but with an extreme dose of action. They’re characteristically high-flying and extremely entertaining and once you get a taste you can’t resist watching all of them. If you haven’t gotten into these movies yet, this list will surely help you know where to start.

The real-life story of the Ip Man, this movie is probably one the more well-known of this genre. The story is of a master of martial arts who learned and excelled in the Wing Chun method. The movie is set during the Sino-Japanese war and shows Master Ip metaphorically taking on the entire Japanese Imperialism. It is an instant classic and 3 additional sequels to the franchise.

A king suffering from what feels like PTSD of the attempted assassinations on his life by not 1 but 3 individuals. Jet Li’s character comes forth to the king and claims to have bested those 3 assassins.

On hearing the tale, the king does not have faith and assumes this nameless swordsman to be a foe to the king. The choreography of the fight scenes in this movie is the most beautiful display of style and beauty with a tinge of elegance. It feels like poetry in motion.

The movie which not only released with the dawn of this millennia but also could be one of the most defining ones of it. It follows the story of 2 respected fighters in the aftermath of the stealing of the ‘Green Destiny’ which was a mythological sword.

The action in this movie lay the groundwork for more movies in this genre and the general action for movies in other genres. It is truly a must-watch film.

The brainchild of Stephen Chow, this movie gives hope to anyone selling themselves short. A comic/action flick where a couple of criminals Sing and Bone try their luck at getting into the Axe gang. They find themselves in Pigsty Ally where they assume the roles of imposters and say they are part of the gang they wished to join.

This led to them having to explain themselves to the gang and how they managed to get an audition to enter. The story follows Sing’s journey from that chance onwards. It might be comical but it does teach us something.

You can watch Kung Fu Hustle with English Subtitles here.

A man wrongfully accused of the death of a corrupt police officer, Chan Ka-Kui played by the Jackie Chan himself, is a man on a mission to clear out his name and bring justice with his flying kicks and natural charisma. This movie really cemented Jackie Chan as an A-list action star and gave birth to multiple sequels in this series.

The life movie of Huo Yuanjia, a true entertainer of the masses. He fought and defeated multiple foreign fighters in front of huge crowds. Considered to be one of the final films of the legendary Jet Li, this movie does put an exclamation mark at the end of his illustrious action movie career.

Recommended Read: Movies about Women’s Rights that are Empowering.

Hard-hitting action. Forbidden love, a revenge plot? This movie has it all, and more. The legendary Jet Li’s character Chen Zen is disheartened by the fact that his master died during a fight.

He fought the man that allegedly killed his master only to find out that he was really weak in comparison. He knew there had to be more key elements to his demise and he tries figuring out who is responsible for the same.

The pain of choosing to honor your responsibilities or let it go for true love is exactly what Takeshi Kaneshiro’s Inspector Jin had to endure. A police officer tasked to kill the head of the house of flying daggers, a group that fights for the people against the corrupt rulers.

In doing so he captures Mei, a blind dancer who was the supposed daughter of the head who he falls in love with. What follows is a real tug of war between his love for Mei and his duty as an officer. It is a movie well ahead of its time as it resonates with people who need balance in their lives.

You can watch House of Flying Daggers, officially here.

The last inclusion on the list is a more recently released movie. Ne Zha is an animated action film. A power-sucking pearl that gets divided into its good and bad essences is placed into the life of two children. The son of the Dragon King and Ne Zha respectively.

Ne Zha who was thought to believe he was born of the good essence was lied to and thus is bound to suffer a curse. The movie is a real good teaching tool for children to let them know that they can change what is destined for them.

There is no certified list of action movies without the inclusion of Jackie Chan. What is considered by many to be his break-out movie, Snake in the Eagles Shadow is a story of a janitor who is a walking talking punching bag of a kung fu institute.

A beggar who turns out to be a master on the run teaches Chien Fu the ways of the snake-style fighting. It gave the world just a preview of the action scenes that Jackie Chan could perform and make his way into the hearts of the world.

Ever had your mom made you pick between martial arts or soccer practice? Well, this movie shows that you don’t need to pick just one. It follows a story of a monk and his 5 brothers who inculcate their Knowledge and strengths of Shaolin Kung Fu into the sport of football to win games. It is not only an action-packed movie but as you would imagine pretty comical too.

Recommended Read: Thriller Movies that are Based on True Stories.

Related  15 Best Navy SEALs Movies That Will Blow Your Mind

The movie that brought Tony Jaa to this genre of films, Ong-Bak is truly a good watch. It is the story of Ting, a man sent by his village to procure the head of the Ong-Bak that was stolen from them. His search leads him to Bangkok where his cousin Humlae cons him.

His fate eventually brings him to the head he was in search of but to get it he has to fight off a drug gang. His exhibition of Muay Thai really helps you get that kick action you need when you watch these movies.

Disney movies are possibly the highest production value you can get for a movie that not only your kids but the whole family would enjoy. In the recent trend of Disney making live-action movies of their classics that made them the company they are today, we have Mulan.

A movie that follows the female lead Mulan played by Liu Yifei and shows how she is a very outgoing and thrill-seeking young girl. Her parents wished she wasn’t like this and wanted to marry her off.

However, disaster struck and Mulan saves her father by pretending to be his son and join the army. The rest shows the tale of how a strong Asian woman can go toe to toe with any man out there.

An homage to a classic in Chinese literature, Journey to the West is a comedic portrayal of the novel with the same name. A story that somewhat mocks the hyperbole of action movies is a story of a demon slayer who was scoffed at for his humane methods of doing his job by Duan who is his romantic interest in the movie.

He tries to achieve enlightenment on his journey with Duan. Its absurdity is what makes this movie a delight to watch.

Donnie Yen’s Hahou Mo is an instructor and a specialist of Martial Arts who was imprisoned for killing another man in combat. A killer starts putting down other famous martial artists.

Inspector Luk Yen-sum along with Mo to get the killer in return for his freedom. The stunt work in this movie beyond terrific to say the least.

Recommended Read: Movies About Black People Everyone Should Watch.

Related Topics:Action MoviesMovies
Up Next

30 Must Watch Movies For Teenage Girls