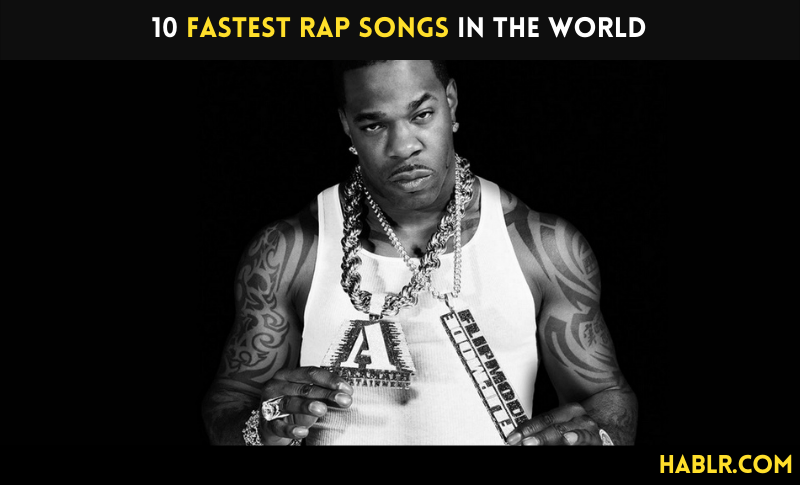 Since the days of the old, hip hop has existed to the delight of listeners with its rhythmic waviness and groovy tunes. But for a long while, rap has infused with hip-hop to become the ‘2 sides of the same coin’, so much so that you cannot mention one without the other. It is the art of expressing a cultural chronicle, with a linear or mercurial flow style, combined with a heavy and usually provocative tone.

One such subsection of the Rap genre is Chopper rap, consisting of fast-paced lyrics with umpteen syllables crammed into a short amount of time. The rappers of the old such as Twista and Busta Rhymes are credited with introducing and perfecting the art of Chopper, with other rap greats such as Eminem and Tech N9ne having regular appearances in the genre.

Today we are looking at the top 10 fastest rap songs in the world. These are songs that have verses getting spit out at breakneck speeds and syllables being recited at inhuman rates. Most of these songs contain an absurd amount of words sung in a limited amount of time, so these songs are judged on the number of words being said per second. Also, a few of these songs are specially credited with having sub-verses that are delivered at double or triple the speed of the song itself. Get ready to hold your breath, here we go!

Busta Rhymes has a name synonymous with speed rapping, and in Break Ya Neck he really breaks a neck with his insane flows and chopper skills. The second single from his fifth studio album Genesis (2001) boasts a total of 758 words in 231 seconds, which is an average of 3.28 words per second.

No Clue whips out his careless attitude and self-appreciative lyrics in his 2007 single New West, providing a lyrical masterclass on a classic hip-hop beat. New West contains 740 words in 215 seconds, which averages 3.44 words per second.

Don’t let the name fool you with how fast this song goes, as any Twista song is guaranteed to give mainstream speed rappers a run for their money. The fourth single on his fourth studio album Kamikaze comes in like a bomber plane and drops a boatload of explosive lyrics on the listener, as the song averages a whopping 1088 words in 316 seconds, which would put the song at 3.44 words per second, with Twista’s own verse at 301 words in 53 seconds, averaging 5.67 words per second.

Chris Brown is usually credited with making smooth pop music, combined with delectable R&B tunes. But the American singer decided to switch it up on the fourth track of his fourth album F.A.M.E., with a feature from industry greats Busta Rhymes, Twista, Mac Lethal, and Lil Wayne. The track covers 818 words in 223 seconds, which amounts to 3.66 words per second.

For the 90s rap fanatics, Eminem is already a figure worth worshipping. His lyrical genius, narrative uniqueness, and thought-provoking music have made people from every age group his fan. In his 11th studio album Music to Be Murdered By, Eminem recorded a song with the late music Juice WRLD that has blown over critics and his fans worldwide over. Made as a tribute to the now-late artist, Eminem one-ups himself from his Rap God days by producing a chopper segment so quick you have to rush to a lyrics webpage to understand what he is actually saying. The song fires 948 words in 244 seconds, turning an average of 3.88 words per second, with Eminem’s feature segment spitting a whopping 224 words in 31 seconds. That is an average of 7.23 words per second!

Breaking in the top 5, Dizzie Rascal takes the listeners back to the good old rap hooligan narrative days with his song Jus’ a Rascal, featured on his 2003 debut album Boy in Da Corner. Bringing a UK vibe to the scene, Dizzie’s Jus’ a Rascal narrates his rogue-like behavior in a tongue-in-cheek fashion, implying that he is who he is, unapologetically, a troublesome individual. This Dizzie mischievous number puts out 818 words in 209 seconds, averaging 3.9 words per second.

What took Eminem a grand total of 6 minutes to do, most of us can’t even reciprocate 8 years after the bombshell known as The Marshall Mathers LP 2 dropped. Rap God is everything you ever want to know about Eminem put together in a song: lyrical artistry, flawless flows, and the acceptance of a God that he is, well, a God. Rap God blesses us with a gargantuan 1530 words in 363 seconds, covering 4.21 words per second. Eminem also gifts the listeners with the now-iconic fast rapping verse, firing a mouth-dropping 97 words in 15 seconds, that is 6.46 words per second! It was this masterstroke of modern-day music that earned Eminem a World Record Guinness Book of Records for The Fastest Rap in a No. 1 Single. Truly a once-in-a-lifetime from the Real Slim Shady.

Twista’s debut song Mista Tung Twista from his 1993 debut album Runnin’ Off at Da Mouth is a song that the old-timers remember as one of the best opening pieces ever created by a debuting rap artist. From here on out, Twista was always known as the artist who can put words into places and recite them really really fast. A veteran of the chopper genre, Twista puts out 1109 words in 248 seconds, with an average of 4.47 words per second.

Related  10 Biggest Houses in the World

If you are a rap fan who has continued reading the list so far, you must have thought to yourself “Where is Tech N9ne in this list?”. Don’t worry, we have not forgotten about one of the most influential rap personalities of yester decades. Worldwide Choppers is a track synonymous with speed rapping just like a teapot is synonymous with a teacup. Tech N9ne goes bonkers on this track from his 11th studio album All 6’s and 7’s from 2011, with 1543 words spit out in 329 seconds, averaging 4.68 words per second.

Our final and quickest entrant in the list is a collaborative song that sees rap giants Layzie Bone, Busta Rhymes and Twista put their heads together to create a truly sensational and flustering piece, featured on Layzie Bone’s 2012 album Law of Attraction. In this piece the artists truly smash it out of the park with 1151 words in just 215 seconds, topping this list with a massive overall average of 5.25 words per second! These numbers just put normally conversing humans to shame and once again show the might of the rap community to make something as regular as talking sound like a menial job.

Related Topics:RapThe Fastest
Up Next

10 Most Expensive Cakes in the World