VPN an acronym for Virtual Private Network is software that helps to connect safely and securely to another less secure network over the internet. A public or open Wi-Fi is not secure for data transmission. Any cyber operator can hack into the network and steal or corrupt data. So, it is important to understand How To Set Up VPN in Windows 10.

When you use a VPN, all such hackers and other spammers, etc. will only be able to see the VPN Servers IP address and not your own and will not be able to track you on the web. It is primarily for this reason that most operating systems like Linux, Windows, Macintosh, etc. have an integrated VPN support.

Having a VPN server support helps in encrypting the data at the sending end, keeping it shielded and protected over the internet, to be decrypted once it reaches the receiving station. This way you can avoid spams and other unwanted activity when working online.

Briefly speaking this sending of data can be done through two protocols or a set of rules.

After understanding what VPN is and its importance for operating systems, there are a lot of companies that provide VPN Apps for use. On the World Wide Web (www) when we browse the net, using HTTPS, it is considered to be secure but still, it is never a complete guarantee against the threats on the open or public Wi-Fi. Thus you must set up a VPN, for online threats protection, in your Windows 10 computer.

A manual set up requires time and computer skills while automatic set up is the easiest option just requiring a few clicks on the PC. We will discuss both the methods one by one below:

A) Manual Setting of VPN Service:

To set up VPN manually, without going in for another app on the PC, we need to follow the below mentioned steps:-

1. As a first step, you will need to search on the internet and subscribe to a VPN service and get the VPN server address. This demands patience and time.

(If you are hard pressed for both time and patience, then you can try e.g. NordVPN, for which you need a NordVPN coupon code which can be obtained by clicking on Nord VPN coupon request.)

After having done this to install this service or any other VPN services you need to proceed as per the steps given below.

2. In this step, after having chosen your VPN service provider from the 1st step and obtaining its VPN server name you can set up the settings in windows 10 by following the below method: 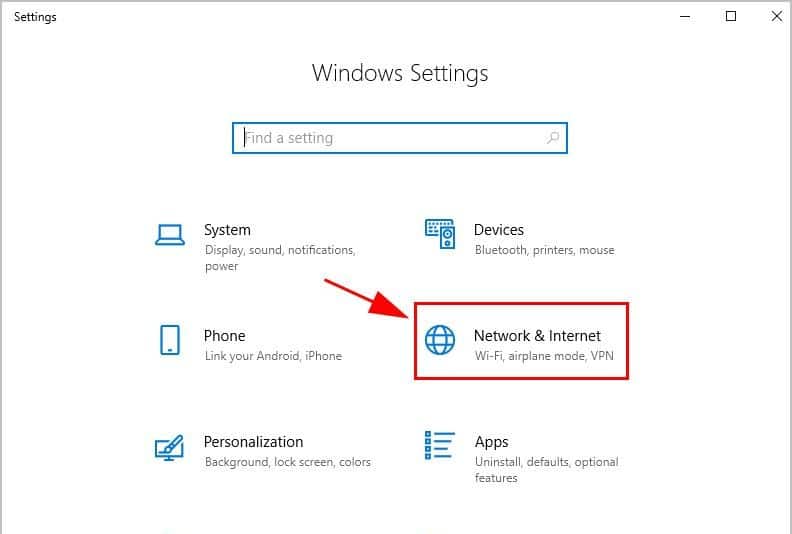 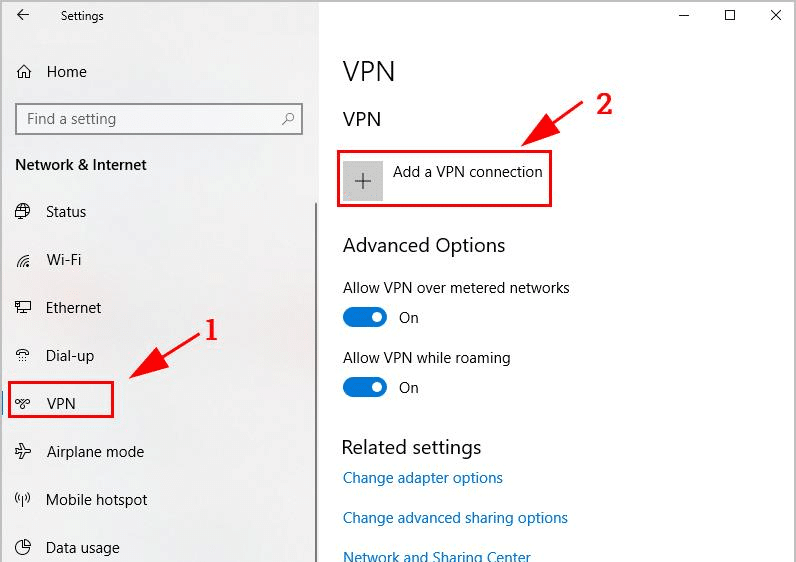 -Name of your connection: Enter a name for your VPN

-Server name or address: Enter the VPN server from your VPN service provider

-VPN type: You can choose Open VPN, IKEv2, L2TP/IPSec or PPTP depending upon the choice of which VPN service you would prefer 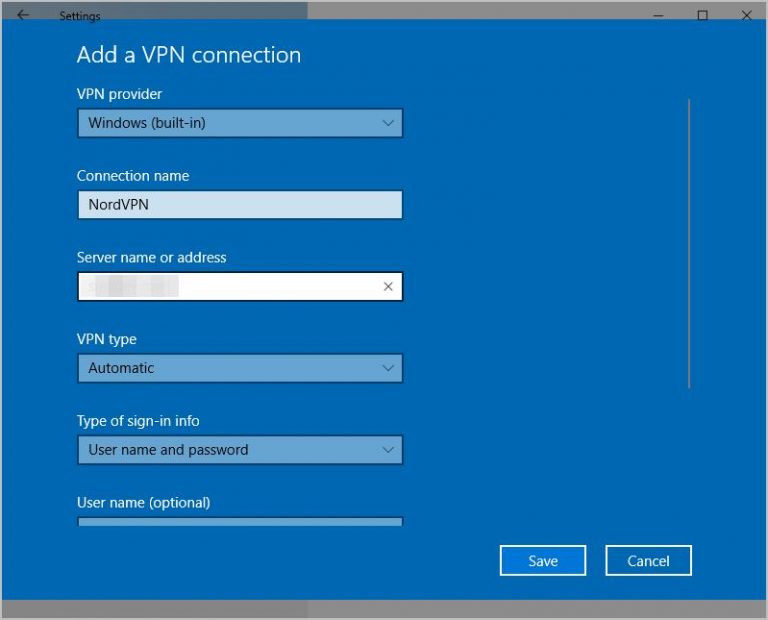 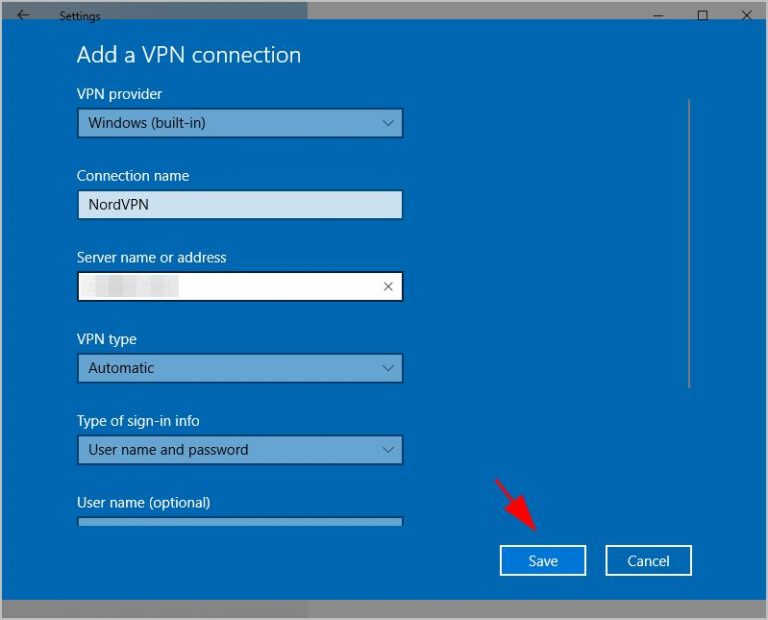 By doing so you have finally set up the VPN connection on your PC.

3. After having set up the connection on your PC you need to connect to the chosen VPN service.

Therefore, on the network and internet panel on the computer, you will see the chosen VPN available which is required to be connected. Click on connect, as indicated with a red arrow in the figure below. 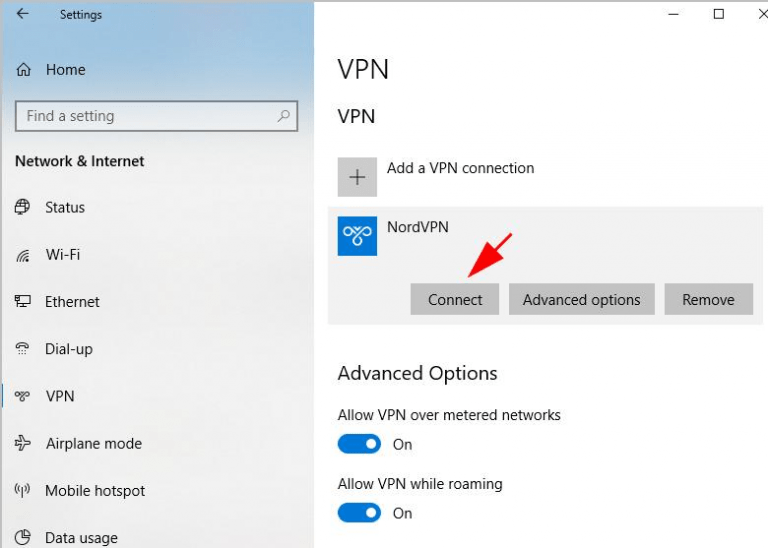 OR the other option is you can click on the internet icon of the VPN Service you have chosen, which would appear at the bottom right hand corner on the task bar, to connect as shown in the figure below.

After having done this you are now all set and should be able to use the chosen VPN service in Windows 10 by entering your username and password, when demanded.

B) Automatic Setting of VPN Service:

The desired VPN service can also be easily and quickly installed automatically in Windows 10 on your PC by simply downloading and connecting to the VPN server at the given location. Once done, the VPN service is ready to use. For example, ExpressVPN, NordVPN can connect automatically at any location where it has its server and is easy and safe to use.

To list a few of the applications one can use :

CONCLUSION: Having explained both the manual and automatic method of setting up of free VPN for Windows, it may be informed that there are four main types of VPN protocols or sets of rules and procedures provided by VPN companies i.e. Open VPN, L2TP/IPSec, PPTP and IKEv2/IPSec.

Open VPN and IKEv2/IPSec are considered the safest, fastest, highly secure and most reliable protocol whereas others are not considered to be as secure and should be avoided as much as possible. With the increasing amount of files around us, sending files and… Screenshots, a screen grab or capturing of the screen at a… I understand trusting premium accounts is not easy. But, brands like… How much does it get onto your nerves when for some…