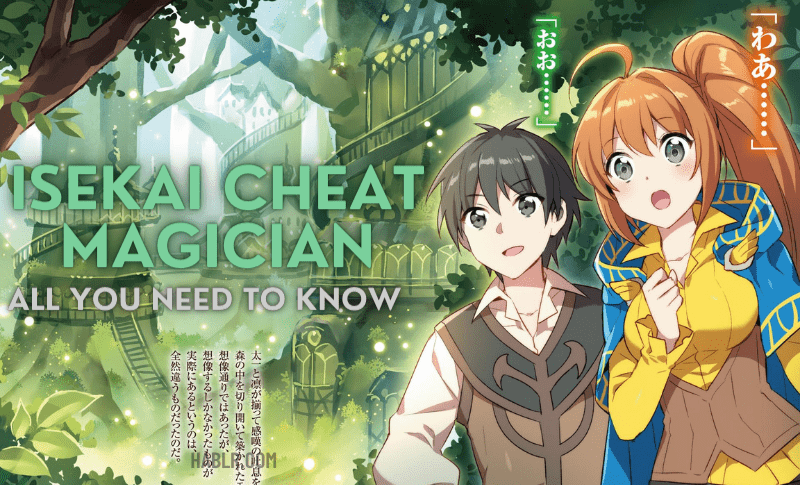 2019 was the year of Isekais, to such an extent that even some of them started airing together. Isekai Cheat Magician is also from the same genre that got very little attention because of its indistinguishable Isekai plot.

Though ‘Truck-Kun’ didn’t make a special appearance here, the two high school students Rin Azuma and Taichi Nishimura were summoned to Altia when they were on their way to high school.

The basic prelim of the plot is the only difference from the rest of its genre as the focus is not solely on the male protagonist. The 12 episodes anime got aired back in July and got wrapped up in September.

Directed by Daisuke Tsukushi and created by Encourage Films, the anime is rated 5.4/10 on My Anime List, which justifies everything about the anime – “Average.”

The main protagonist of the show, a 15-year-old high schooler who is optimistic, kind, and unambitious. After transferring to Altia, he became a Unique Magician who can directly use magic and his specialty – Summoner which allows him to summon an elemental spirit.

Being overpowered and a clear advantage over his enemies, he used the tag ‘cheat’ magician; therefore the series’ name.

The main female protagonist is a classmate and childhood friend of Taichi. She is very smart and has distinctive brown hair with a ponytail.

After transferring to Altia with Taichi, she became a rare Quad Magician which means she can use the four elements of nature – Water, Fire, Wind, and Earth.

Though she had lower capabilities than Taichi she could use her dynamics in various ways.

The wind spirit – Aerial is the elemental spirit of Taichi. But as he increases his levels, Aerial transforms into The Queen of Wind Spirits – Sylphid.

Also known as the “Mage of Fallen Leaves.” She is the mentor of both the protagonists in Altia and also a Triple Magician (Fire, Water, and Wind).

Muller is an Elf, known as the “Golden Swordswoman” because of her versatility in using swords. She is also the former apprentice of Lemia and a Dual Magician (Fire and Earth).

You can watch Isekai Cheat Magician on Crunchyroll here.

I will be honest and blunt about the review; the plot was too rudimentary and predictable to stand out in a saturated genre of Adventure and Fantasy.

Keeping the prelims aside, though it started with the focus on both Taichi and Rin, the spotlight was on the former one for major story progression, fight sequences, and hot women (so, obvious!).

The show doesn’t provide both of them with inborn powers rather with huge natural flair. The build-up and character growth are rather formidable and constant.

Taichi and Rin, discovered their exceptionally strong magical and physical prowess while enrolling as adventurers. Intending to return to their hometown, they started to train under Lemia and got stronger with each episode, so the pace was justified.

Both had great magic powers compared to the normal adventurers but between them, Taichi was far ahead, by leaps and bounds (another mainstream thing).

Another problem with overpowered main characters is they will win pretty easily and it kind of becomes repetitive but the problem can be solved by animation and variation of different moves and assets.

Isekai Cheat Magician had one of the laziest animations so, the characters winning against various villains like monsters, burglars, etc was pretty straightforward and had no surprise element in them.

Coming back to their powers, Taichi had the potential of using Summoning Spirit and Rin had the ability to use all four forces of nature. Rin having such versatile powers isn’t used very efficiently.

The antagonists’ plot worked as the puppet theory (to manipulate the lower order). Lodra and his mistress, Lady Shade were the main antagonists in the series.

Inimicus (the puppet) was brainwashed by Lade Shade (puppeteer), who went against Taichi in the final episode. The only fight that had the thrill of a great match, as Taichi united with his spirit, Aerial (evolved into Sylphid in this episode) to defeat the demon-transformed Inimicus.

In the brisk of death, Inimicus revealed the actual plot device – Shade was willing to transform the world with Taichi’s powers and she was the one to transfer them into Altia.

It was quite predictable as Shade didn’t share too much screen time but her words and intentions hinted at the greater motive than the civil war in Eristein. The anime ends with Taichi promising to protect his friends no matter what.

The soundtracks and OSTs were not too heart-throbbing nor calming. It was like they have gone basic in everything as a result it got lost in the crowd of the Isekai genre.

The opening song – “PANTA RHEI” by Myth & Roid and the ending “Chiisana Omoi (小さな想い)” by Rin Azuma were the only appealing thing I found about the whole anime.

This anime is not for the ones looking for a thrilling story with a lot of entertainment. Isekai Cheat Magician is rather a mainstream fantasy that has a lot of potentials but is wasted as it doesn’t go into the exploration of the diverse dynamics of characters.

If you love solely the Isekai genre with not so complex storyline, this is the perfect one for you. Although, the anime was rated pretty badly for its straightforward approach but gained a million viewers and a potential Season 2.

Isekai Cheat Magician: Season 1 officially aired on 10th July 2019 on Crunchyroll. There are no hard promises as it comes down to the budget earned from the show.

Compared to the quality of the show, it did fairly well and there is a little chance of getting a season 2. Though there is no official announcement from the franchise, it is speculated to be towards the end of 2021 or starting of 2022.

The show is a bit popular with Japanese audiences than in International.

No, the manga didn’t end but the Soreyuke! Isekai Cheat Magician Spinoff Manga ended in 2019.

You can shop your favorite items from the official Isekai Cheat Magician offical website or ebay.